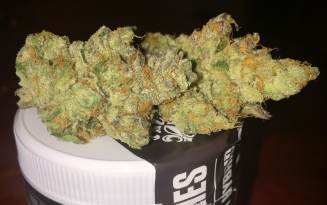 This was my first time trying anything by Royal Tree, I passed a jar of their White Tahoe Cookies and had to cop, it looked amazing. The strain White Tahoe Cookies was created by Kush4Breakfast and is a three-way cross between The White, Tahoe OG, and Girl Scout Cookies. Upon opening the jar, there was a skunky, earthy and slightly nutty smell, and when I cracked open the nugs I got a dash of sweetness too. The buds are extremely visually pleasing, they are a pretty green with clusters of orange hairs, and small patches of deep purple peeking through. The cross of The White is definitely apparent in the trichome density, the nugs were totally frosted; they glistened beautifully like they could have been rolled in confectioner’s sugar. I smoked a few bong loads of it and the taste was a lighter kushy and earthy taste with a slight sweetness similar to the smell. The effects after smoking this were pretty intense… it pretty much backhanded me across the face lol Let me just paint the picture for you: Initially, I had planned to smoke 3 bowls to see how I felt, and after the first bowl, I was so stoney and spacey, that I smoked a second bowl, and almost immediately forgot I smoked it. Then, I was sitting there maybe 20 minutes later thinking I had still only smoked one bowl, so I loaded and smoked a third bowl… THEN, about 20 minutes later I literally turned to my boyfriend and said, “wait… can you load me another bowl?? Did we ever even smoke a second one?”… So hopefully that gives you a pretty good idea of where I was at. My body high was pretty amazing and I was pretty much just locked into the couch spacing out and almost loosing small chunks of time. The high was also pretty euphoric, although I was very unfocused, everything seemed very cerebral and visually pleasing, I was really entranced in an episode of Rick and Morty for a while. Overall I was just in a great mood and feeling really relaxed. I think this would be perfect for someone who has a lot of stress, pain, or someone who is just looking to get stoned as fuck.  Another thing to note was I did get the munchies pretty hard every time I smoked this. This White Tahoe Cookies is clearly Cookie Queen Certified!

View all posts by Victoria Martin